Even before I had finished my last adventure, Cycling from London to New Zealand (2011 to 2013) I was thinking of the next adventure the next challenge.
Having been quoted in more than a few News Papers and on TV. I am again passed the point of no return. Realistically I wouldn’t say something I didn’t think I could see through.

In June 2015 I will set off from the most Northern Navigable pubic road near Prudhoe Alaska. Just above the Arctic Circle on another 2 year adventure that will see me cycle through Canada, America, Mexico, Guatemala, Honduras, Nicaragua, Costa Rica, Panama, Colombia, Ecuador, Bolivia, Peru, Chile on my way down to Ushuaia Argentina, Most Southern point of main land South America.

Since I am Asthmatic I will again raise money for Asthma along the way. Giving more meaning to my trip. I may now have experience. But there is always still going to be some degree of unknown. After some research I am slightly terrified with the thought of having to deal with Wild Bears as I camp out in the open in Alaska and the rest of North America. Armed bandits in central and South America are all so a concern. The 5000 meter passes in South America will be a challenge. I won’t let any of this deter me and look forward to again sharing my experiences on what should be another 2 wonderful years of adventure…………..The Golden rule remains the same. Never cycle back.

Adam Glover cycling Alaska to Argentina has now become Adam Glover Cycling Wellington to Alaska and Alaska to Argentina. Back in October 2014 I started to think it would be quite nice to start my next journey by been able to pick exactly where I had left off after cycling in to Wellington on my last trip, just under two years ago. I came up with the idea of rebuilding my old bike and cycling from Wellington to Auckland to where I would try and get on a container ship to the USA and to then cycle to the top of Alaska.

After months of talks things final fell into place just 10 days before my departure and I have instantly added 9000km to the next trip. Come the 6th March 2015 I will become a continuation of the last trip as I start cycling from Wellington to Auckland to arrive in time for the 20th March to get the containership Sprit of Shanghai with Hamburg Sud, from Auckland to Philadelphia on the USA East Coast. A voyage that will take 25 days and goes via the Panama Canal I will arrive in Philadelphia on the 14th April and shortly after that will start cycling across the USA before climbing up into Canada and continuing to head North West before reaching Alaska. 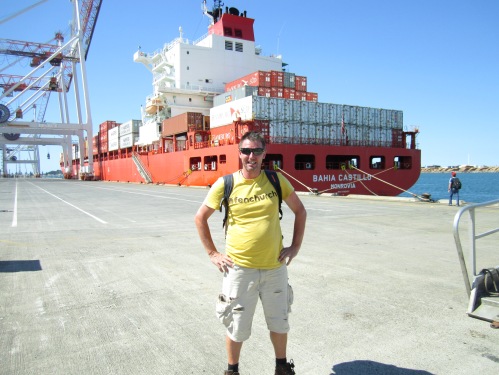